He could immediately tell from their faces, how despicable they were when she walked up to them in a lacy, spaghetti crop top and a pair soft, cotton tennis skirt that left a good deal of her fair legs for all to ogle at.

As they bought her rounds after rounds of drinks, Ivan’s gaze was switching between her, and the series of network-connected spy cameras he had installed in the hotel room where they was supposedly having a staycation – except that he had her tell them a ploy, that he would only return after work at 2am.

The group finished all their drinks as soon as she told them about the room, quickly making their way to maximise their time with her. As for Jacq, she knew that he would always be nearby, and watching. Ivan could only imagine how disturbed she was feeling, but the punishment had to be done.

Once in the hotel, Ivan, with his laptop and phone in his hand, made himself comfortable at the lobby while the gang proceeded upstairs. A single click activated the cameras in recording mode, providing him a live feed of the action happening in the room as it happened.

Like a rag doll, she was shoved into the bed as soon as the door was locked, sex-depraved men stripping as they surrounded her. Jake had held up his end of the deal by inviting no more than three men for this ‘party, himself included. Once all the participants were naked, Jake paved the way by perching her back against the headboard. He ushered for the rest to get started and boy, did they pounce on her like hungry wolves.

First were two men getting on their knees by her sides, impatiently raising her hands to their cocks so they could enjoy her shy fingers wrapping around their huge cocks. The third man then dived headfirst into her pussy, twisting his neck to gorge her shaved, smooth pussy out. The last to join in was Jake, easily sliding his cock into her mouth since he was already standing/ squatting in front of her.

The four of them went all out at her, though doing their best not to push her beyond her limits. Jacq was just moaning hysterically with a cock in her mouth! On Ivan’s screen, she did seem like a poor bitch getting ripped apart by four wolves. Oh how his heart ached, and cock throbbed. The whole punishment thing was proving itself impossible to bear even before the fun really began.

(Jakecommanding) ‘Guys, I don’t mean to be selfish but I’m going to draw first blood. Kit, pull her lower down on the bed.’

She was dragged to the center of the bed by her feet and Kit, the one eating her out, left momentarily to let Jake pick his position. The two guys at the end of her arms were still getting jerked off, though not for long. Jake had settled down between her legs, which he raised for Kit, then kneeling over her face, to hold.

Imagine a girl on her back, arms straightened out as far as they could reach, has her feet spread and raised up and above, towards her face. That was the position Jake would fuck her in. Kit took the opportunity to stick his cock down her throat, thrusting gently as Jake penetrated that helpless little girl.

The whole scene got more intense as Ivan watched her struggle, to the powerful pounding at her pussy, to which she could not moan or breath properly due to that second asshole’s cock in her mouth. Thankfully, it didn’t take them more than a minute to realise the horror of what she was going through, and relieved her of her obstructed breathing.

Jake basically went all out at that chance and pumped her till he came, depositing all of his load into her pussy without a single drop wasted. They had taken the liberty to shut her legs once he pulled his drenched cock out of her. 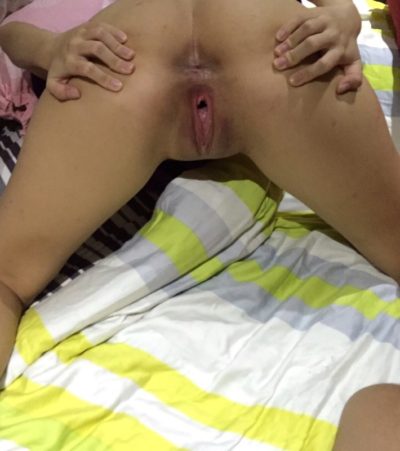 Kit, the overly excited boy plopped his ass down and kept her face close to his groin, while the second ‘comer’ hammered her in record speed. The t.p.m. (thrusts-per-minute) was so high no one else could enjoy her any way else, locking them out of his indulgence. As disappointed as they were at his over-zealous spirit, he was making noises that seemed to come too soon.

His body collapsed over Jacq’s back, and it was barely two minutes into his turn. The rest of them promptly called out ‘next!’ in unison to mock at his bad performance, to which he shamefully excused to one corner to sulk.

The other two left the bed in silence to the both of them as if they knew of something, something like how easily he gets attached to people. Jacq was just lying motionless, partly exhausted, partly overwhelmed with guilt, and partly glad that this was going to make things better between Ivan and her.

Like a loving couple, he laid on top of her and slid his cock in, gasping at the wetness and tightness. The quick-turn of his head towards the sulking man told Ivan of how much he understood the cause behind his ‘fast-game’.

Unlike others, he paced his thrusts and even moved quite gracefully, slamming his hips almost vertically downward at her pussy, jabbing her at the second-most sensitive spot in her lady part. He was able to keep going for more than five minutes, before Jacq started acting up. To Ivan’s disbelief, the signs of her sensual massage on her own boob, other hand clawing at that man’s back, he was in fact, summoning an orgasm out of her.

In the next two minutes of their love-making, their breaths could be heard increasing in pace, as well as her erratic closing and opening of her thighs. Not long later, a loud, high-pitched moan came about to express her intense orgasm he had successfully induced.

Kit, was leaving Jacq completely alone to do her thing, without any involvement of his hands or any hip-thrusts. Oh only God knows how long this ordeal was going to last – if Jacq didn’t have anything up her (non-existent) sleeves.

Just three minutes into the oral sex, he was making noises Ivan didn’t understand. On his screen, he could see how dedicated Jacq was, making long, deep strokes up and down his shaft while keeping eye-contact. On that pixelated, zoomed-in view, she was doing something with her throat Ivan had never seen before.

His attempt to crawl away from her was thwarted by the headboard right behind him, and she got on her knees to thoroughly drain him of anymore desires of girls going down on him. Finally, he had to literally dash out of bed to avoid any more of her, only for the rest to laugh at.

(Jacq calmly said to them) ‘Okay. You guys have to go now. We did everything as planned right?’

(Jake replied) ‘Yupp. Let’s go guys. I can only hope that we will see her again.’

The gang got dressed and disappeared quicker than before they had their fun, and Ivan went back to her after he confirmed their departure. In an unexpected twist of event, the couple discovered a whole new depth of love, that resulted in a night of hugs, sex, more hugs, crazy sex, crazy, sobbing hugs, and beyond-comprehension sex that covered everywhere from the windows, to the bathtub, right up to the opened door in the wee hours of the morning.

Now that is what I call ‘fucking love’.