I swung the bunch of keys with my index finger like a helicopter’s rotor. That bunch of keys would unlock the door to the sky lab, which few knew existed on NYP’s highest roof. Well, it was more of a room with telescope and some astrology equipment. I was once handed those keys to retrieve some hard disks of data, and smart (stupid) me immediately went to duplicate a set – for emergency like this.

Please note that this entry was written from memory, it didn’t occur just yesterday. So don’t expect the roof or locks to be the same.

It was close to sunset, but it didn’t matter anyway. The roof out of anybody’s sight, and even if the closest flats or dormitories could see, the few room erected up there would block their view. Total discretion, also good for any controversial experiments running up here.

Clarissa was one of my group mate for most of our course’s modules. She was an attractive girl to start off with, taller than me at 1.68. And yet lighter than me, at 45kg. Not to skinny, nor too meaty. We developed our fuck buddy relationship under a weird situation, a feet tease. At one of the pair work in communication skill, she turned her chair (in front) around to face me. Since there were other students right beside us, our waist-down was well obstructed. Her heels accidentally brushed against my hairy legs and downwards to my slippers. She removed her heels and her toes toyed with mine, squeezing and caressing, stepping and even more stroking.

We began flirt texting and sexting followed closely. Within two weeks, we had our first rendezvous in the handicapped toilet at Block E. And now, I present the skyline experience.

Clarissa and I went up to our new hideout and as expected, no one else was be up here. I took a few minutes to check out the other room and it was empty, save for two tables and chairs, and a fan! The other room was the one with a telescope and lots of other gadgets. Thankfully, we didn’t have to do it against the skyline outdoor.

We took the empty room and Clarissa began a walkabout. She found a blind which served to block out light, possibly for development of films or serve as an observation post. She tugged at it and up it went. The warm, orange light came onto out faces like a nuclear bomb going off. I shifted the table to the window while she stared at the dawning sun.

I went behind her and wrapped my hands around her possibly 25 inch waist. She wriggled and breathed deep, enjoying the comfort and warmth. My fingers then went down to her tummy and released the belt to her black Espirt shorts. She had put on a cardigan for her top, with just a bra underneath. She wasn’t a looker in terms of clothes, just simple tops and bottoms, mainly shirts and skirts. My pants was down to my ankles in record time and so were her translucent black laced panties, which was already wet with excitement.

Her pussy wasn’t tight nor loose. Maybe I was smaller, I don’t know, but it was a fit, at least according to her. Since the first time we did it, there was no stretching, neither did I miss and buttons along her vagina walls. We humped away as the sun set into the abyss. Once it disappeared beyond the horizon, Risa stopped and turned around.

Part one had close to thirty minutes of pounding. And now, it’s time for after dark activities. Pushing me down on one of the chairs, she sat on the table and I began licking up whatever was coating her pussy lips. Her clit was found to be super sensitive, since wearing something like open-crotch panties would get her wet in no time. In short, the lesser she wore, the hornier she got. I liked sucking on her clit and watch her struggle to keep her legs opened for more.

We do still meet, just that our stories had not been declassified. Teehee :3 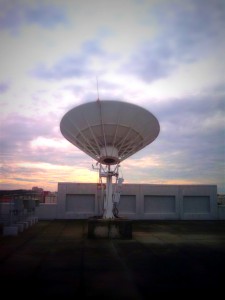